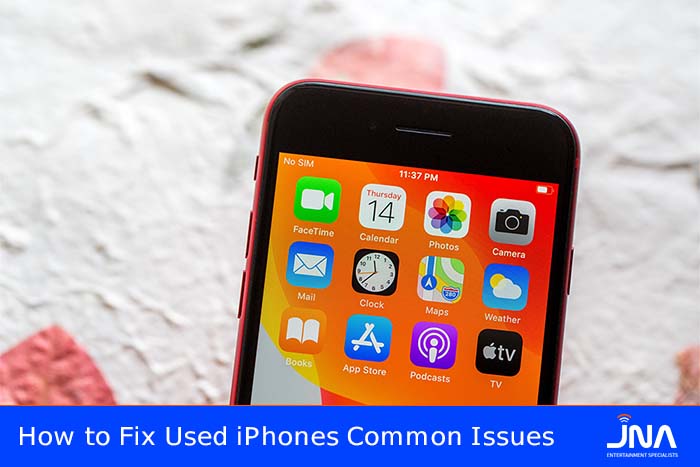 If you’re seeking to buy used iPhones in bulk, you’re probably already aware that each iPhone and iPhone Plus model has had its fair share of common issues and problems. When acquiring these devices from a used iPhone reseller, it’s critical to be aware of the potential hazards. Many of the most frequent problems can be resolved for very little money.

The Most Common Issues With iPhones

You can look all over for old iPhones that have been precisely rated and thoroughly examined. Despite your best efforts, you may still run into a variety of iPhone problems.

Here are the most common iPhone issues, along with solutions.

There Are No Vibrations

No vibrations may be toward the top of the list of iPhone 5 common issues. Your iPhone smartphone is not working properly if there are no vibrations. The vibration motor in your iPhone may need to be changed to fix the problem.

It’s relatively straightforward to replace the vibration motor in an old iPhone. After an iOS upgrade, a handset may stop vibrating or delivering haptic feedback. However, the issue isn’t always caused by a software flaw. If restoring factory settings or doing a DFU restore does not resolve the issue, the haptic engine is likely malfunctioning and must be replaced.

Verify that the switch next to Vibration is turned on in your iPhone’s Accessibility settings. Your device should vibrate if the switch is green.

It’s also possible that if the iPhone’s vibration pattern is set to None, it won’t vibrate. In this case, go to Settings and choose General, then Sounds & Haptics, and finally Ringtone. At this point, go to the top of the screen and select Vibration. Make sure that everything except None has a checkmark next to it.

If NONE of the above methods work, your iPhone’s vibration motor might be broken. Here’s how to replace a vibration motor in an iPhone step by step. The guide will walk you through every step of the procedure.

Bad batteries are one of the most common iPhone 6 flaws. Long-term use of an iPhone causes the battery to degrade. As a result, the more frequently an iPhone is used, the more likely the device’s battery may fail.

The battery capacity of used iPhones is typically lower than that of new iPhones. However, some older iPhones may experience quick battery drain issues, such as when the battery drops from 80% to 20% in a short period of time, especially after specific iOS updates.

Also Read: Mobile Phones Wholesale Suppliers: Is it Worth It?

It’s also worth mentioning that Apple has stated that iPhones with older batteries would slow down. The good news is that some of the known battery depletion concerns are software-related and will be addressed in future versions. Apple has also included the ability to monitor battery capacity. In some circumstances, updating the iOS on a phone can resolve battery concerns.

To begin, make sure the phone’s iOS is up to date. Replace the battery if this doesn’t work.

In most cases, replacing a damaged iPhone battery takes only a few minutes. And each time you do it, it gets easier. To get you started, here’s a compilation of YouTube video instructions on iPhone battery replacement.

In rare circumstances, the Touch ID security function on used iPhones fails. Most of the time, these problems are very transitory and may be resolved by installing software updates. However, just like with battery problems, this does not always work.

Touch ID issues on the Apple iPhone 5S are rather widespread. Apple has improved the Touch ID sensor in newer iPhone models to resolve these difficulties.

If you acquire a lot of iPhones and some of them have Touch ID troubles, reset the system settings to default. You can also try rebooting your iPhone and confirming that Touch ID is enabled. If it doesn’t work, upgrade your iOS to the most recent version and rescan your fingerprint.

Keep in mind that Touch ID might be a touchy subject. To clean the Touch ID, use a microfiber cloth. This allows you to clean the reader of any dust or dirt that could cause it to malfunction.

A light touch of the Touch ID sensor will not trigger a response. When using a used iPhone to test Touch ID, make sure your entire finger is positioned against the reader. To see if the reader responds to your finger, keep it motionless for at least a few seconds.

Touch Disease is a one-of-a-kind iPhone screen issue. When the touch controller chip fails to fully connect to the logic board, this problem occurs. A flashing gray bar emerges at the top of the display as the first symptom. The phone’s touch screen becomes unresponsive as the chip detaches further.

The most common flaw with the iPhone 6 and 6+ was this. Other iPhone models have it as well.

A simple force restart may be enough to fix Touch Disease. You can also remove and replace your iPhone’s SIM card, reset the device’s factory settings, or erase resource-intensive apps. If none of these options work, you can resolder the touch screen controller chip onto the logic board using a microsoldering iron. This necessitates dexterity and caution. If you make a mistake while microsoldering, the iPhone could be permanently damaged.

With or without a case and screen protector, an iPhone is a tough, durable smartphone. Accidents can happen in any situation. The screen of an iPhone might crack if it is dropped or falls.

A typical iPhone problem is cracked glass. This problem can only be solved by replacing the complete screen.

You can buy kits to replace a cracked iPhone screen on the internet. They frequently provide instructions for properly removing a damaged iPhone screen and replacing it with a new one. This video, for example, shows how to change the screen on an iPhone 7 Plus.

You don’t have to be an Apple specialist to figure out how to mend an iPhone. Here are some suggestions for troubleshooting common iPhone issues:

These suggestions will not fix every Apple iPhone issue. However, they can assist you in resolving typical iPhone issues in a timely and cost-effective manner. You can also use them to keep an eye on the condition of your iPhones in order to prevent problems from arising.

The quality of your inventory will be affected by where you buy used iPhones. You’ll be well-equipped to avoid device difficulties if you find a reputable provider of appropriately graded iPhones.

We recommend working with an industry-leading iPhone problem solution supplier if you wish to buy cellphones in quantity. As a result, you’ll be able to purchase iPhones that meet or surpass your expectations. Plus, you’ll be able to avoid purchasing an iPhone that has a charging difficulty or other concerns.

While there are certain complications that can arise when purchasing iPhones in quantity, many of them can be resolved with little effort. It all boils down to pricing and value at the end of the day. If you get the appropriate deal, buying repair inventory might be more profitable than any other purchase in some situations.

We help businesses buy iPhones in bulk at JNA Dealer. Every day in this profession, as anyone in the industry knows, brings new problems. Our goal is to assist you in being better equipped to deal with whatever challenges arise, so you can optimize your profits. 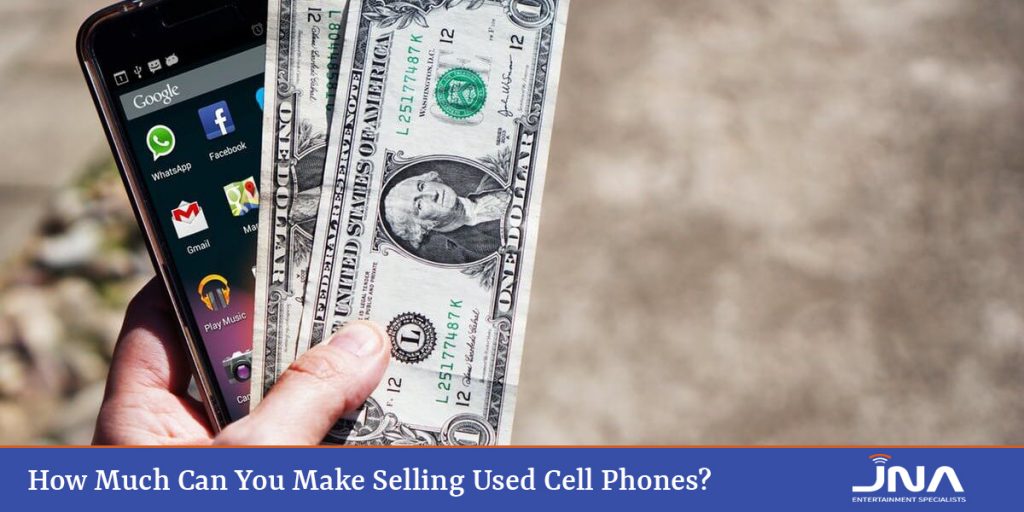 The size of any possible profit margin is a critical factor in any business venture. Also the most appealing markets, where sales volumes and profits tend to be high, will fail the profit margin test on occasion.

There are a variety of reasons why the demand for used cell phones has begun to eat into the growth of the new smartphone industry in recent years. The fact that used cell phones are so much cheaper, despite the fact that new handset RRPs have continued to rise, has prompted an increasing number of customers to search for better value in used mobile phones. As a result, more retailers have entered what is by all accounts a burgeoning industry.

Also, Read: Guide on How to know if a Phone is Fake or Original

However, an equally critical piece of the puzzle is the fact that selling used phones generate a higher profit margin than selling new phones. Vendors are fortunate to get margins of more than 3-5 percent on new cell phone sales due to high RRPs and strong control of the wholesale phones and retail markets by big-name manufacturers. Despite used phone retail prices being 65-75 percent lower than fresh, retailers can easily make margins of 10% or more due to the greater freedom and low wholesale prices of used phones.

The right phone, with the right margin

In fact, putting a ballpark figure on margins across the entire used phone trade is somewhat misleading because there are so many variables at play. Even if we ignore a company’s running costs and focus solely on the smartphones, the amount of money you will earn from buying and selling a used phone can differ significantly depending on factors such as brand, model, features, case color, and the accessories you ship with it.

Used phone dealers, on average, will make a higher profit margin on higher-value, higher-spec handsets. Let’s say you purchase a mid-range smartphone in average condition for $70 and can resell it for $120. The 100 percent mark-up seems to be rather appealing. However, if you have to spend $25 on refurbishment, plus another $10 on publicity and running expenses, it’s not a good deal. Your gross profit is just $15, representing a 15% margin.

When you purchase a much higher-spec used phone in better condition for $350, you can sell it for $450. This time, the mark-up is just 66 percent. However, you only spend $10 on marketing and maintenance expenses per unit sold as a counterbalance. As a result, the gross profit is $90, a far stronger margin of 26%.

When you purchase devices from JNA Dealer, our trade team has decades of experience in the used phone industry and can advise you on competitive resale rates. On both the normal and marginal VAT schemes, we stock all devices from grade A pristine to C. For more details and a current inventory list, please contact us today.

You can shop with confidence knowing that your first order is covered by our 100 percent satisfaction guarantee, and all subsequent orders are protected by our industry-leading return policy.